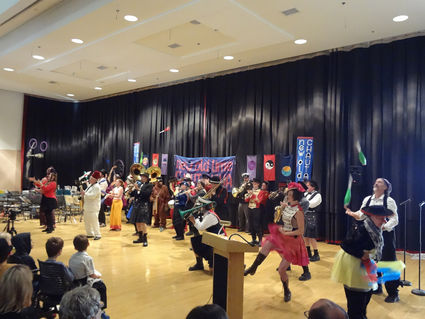 The full ensemble of the New Old Time Chautauqua set the score at the start of Friday's evening performance at the Nolan Center. Prepared for only 160 people, organizers had to pack the main hall with additional chairs as over 200 came for the show. More were turned away at the door as the show sold out.

It was a sold-out show at the Nolan Center last Friday, as over 200 Wrangellites packed themselves in to watch the New Old Time chautauqua, a vaudevillian group of performers based out of Washington. The traveling troupe is passing through Southeast Alaska on a summer tour – the "AKqua chautauqua" – its first visit to the state since 1992.

Nolan staff had only planned for a crowd of 160, but word-of-mouth and a pair of parades through town on Thursday and Friday had sparked considerable interest. By the time the band began playing, latecomers scarcely had room to stand and some 30 people had to be turned away from the door.

"We can't say enough about it. It was just a huge, huge success," said Carol Snoddy, environmental director at the Wrangell Cooperative Association IGAP office.

Founded in 1981 by a group of performers, health care practitioners and educators, the chautauqua revives a brand of entertainment once widely popular in the rural United States until the Great Depression. As a movement, the chautauqua emphasizes community-building through education and entertainment.

A nonprofit organization, the chautauqua makes a point of raising its own funding for tours, not relying on grants. Partly this is just sound planning, but co-founder Paul Magid explained it gives the group a sense of artistic independence as well.

"We do benefit shows throughout the year to raise money for the summer," explained Eben Sprinsock, one of the troupe's two bandleaders. A friend of Magid's since high school, Sprinsock has been touring with the chautauqua each summer for three decades.

Most of those on tour have done chautauqua before.

"We like to have a balance of previous tour-goers," explained Erin McNamera, costume director with the show for the past 11 years. Tour veterans tend to make up about two-thirds of the group. The result is a changing range of acts with a multi-generational group of performers, all centered around the chautauqua's main purpose.

"The chautauqua is essentially a forum for free expression," Magid said. "For me this is important as a citizen."

In his view, the freedom of education is the United States' most significant contribution to the world,

and the essence of the chautauqua movement is to celebrate and encourage the unique variety of experience and perspective the country has to offer. In every town the group visits, it welcomes local participation in the name of community-building.

"That's part of what we're doing, is to get communities together," said Karl Meyer, the group's board president and a performing member since 1991.

chautauqua members delivered presentations on Thursday and Friday afternoon, sharing some of their wide array of skills and interests. Visitors to the carving facility and Nolan Center had the opportunity to learn how to play ukelele, friction-start a fire, perform magic tricks and juggle, as well as learn the history of the movement.

Performers in the chautauqua are all volunteers, put up only for their food and travel during the tour. The rest of the year they have jobs and careers of their own.

"They all work for a living. This is their vacation, basically," Magid explained.

On her second tour, Amy Engelhardt is an accomplished singer and songwriter, previously a member of the Grammy-nominated vocal group The Bobs. What first drew her to chautauqua was its sense of fun and purpose.

"It's something that gets you out of your head and using the skills you have," she explained. "This is one of the greatest adventures I've ever had."

Acrobat and dancer Ty Vennewitz has been with the chautauqua off and on over the past eight years, after first hearing about it through the Oregon County Fair. Taking time off to attend the National Circus School in Montreal, what brings him back are the unique experiences to be found on tour.

"There are so many magic moments," Vennewitz said.

Not all of the troupe are entertainers by profession. For instance, Meyer is an outreach coordinator for the Community Food Co-op in Bellingham, Wash. Introduced to the group through a friend of a friend (of a friend), he jokes and juggles under the stage persona of "The Great Noodlini" each summer.

However, the skills he picked up on tour have helped with his work. Reaching out to Bellingham-area schools, Meyer helped the Co-op launch a show of its own to entertain and educate students on healthy eating habits and nutrition. "The Real Food Show" employs a vaudevillian flavor similar to the chautauqua to get its message across.

chautauqua performers live together on tour in a camp environment, sharing daily chores, scheduling shows and practices, and exchanging ideas and developing strategies each morning after group warm-up activities.

"It's just a great family to be a part of," Meyer said. Though the tour's pace can be wearying, troupe members find time to entertain each other and enjoy themselves.

Erin McNamera explained she likes the eclectic personalities of the performers and unique locations the chautauqua finds itself. Her favorite part though is the community service. At each stop, the group volunteers its time to take on a project put forward by its hosts.

In Wrangell, the acrobats, musicians and stagehands worked together to clear the undergrowth from around Chief Shakes' gravesite on Case Avenue. 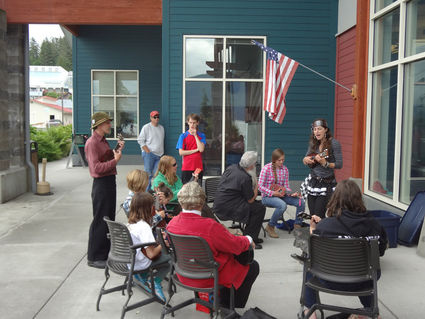 Wrangellites learn some of the finer points of ukelele playing during one of many presentations at the Nolan Center Friday. More than just a form of entertainment, the Chautauqua format also stresses the importance of education and diversified interests.

On its Alaska tour, the group has also presented special gifts to hosting tribal groups to thank them for their hospitality. On Thursday the group presented WCA president Sam Campus a blanket hand-stitched with the chautauqua's distinctive eagle emblem.

Along with the staff at the Nolan Center, WCA helped make the group feel at home during its stay, giving performers a cultural presentation at the Chief Shakes Island house and hosting an evening potluck at the SNO Building Thursday.

After Wrangell, the chautauqua traveled to Petersburg through Tuesday, and will be in Juneau for its Fourth of July celebrations this weekend. The Alaska tour wraps up in Sitka on July 13, after stopping through Hoonah and Haines.