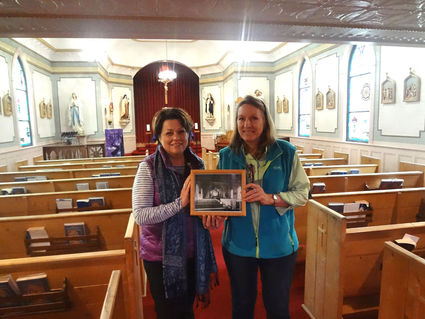 Anne Morrison and Peggy Mitchell hold up a picture of St. Rose of Lima Catholic Parish as it had once been in the 1950s as a comparison to how it looks today. Parishioners and other community members pitched in to renovate the building and restore some of the sanctuary's previous look.

Parishioners of St. Rose of Lima Catholic Church will be opening their doors to the community on Saturday, from 10 a.m. to 3 p.m. The open house is to let people see what progress has been made in renovating the historic structure. All are welcome to attend.

On May 4, 1879, Wrangell's was the first Catholic parish established in the Alaska Territory, and the present building has been in use for over a century.

Peggy Mitchell and Anne Morrison explained repainting had begun back in October as part of the repair work being undertaken by Fr. Thomas Weise. Weise had been the pastor of both St. Rose and Petersburg's St. Catherine of Siena parishes since 2011. A handyman in addition to his clerical role, during his tenure he had spearheaded restoration and repair projects at both churches. He died last December following heart complications while visiting family for Thanksgiving.

Weise had initiated talk of a change by painting one of the mounts for a Station of the Cross a bright yellow. Mitchell said that color hadn't gone over so well, but after 20 or so test applications Morrison explained the congregation was able to come to some consensus.

Previously, the nave – or interior of the church sanctuary – was painted a matte pink, which Mitchell pointed out was reminiscent of Pepto-Bismol. The dull rose color evoked memory of the parish namesake, St. Rose of Lima, but was not original to the building by any means.

The combination of grey-green and leafy cream tones that was decided upon complimented the colored glass of the church's windows, and the painted trim was more in line with how the interior was originally decorated. As is common with new arrangements, there was some opposition to changing tones but Morrison said that too had changed once the painting was finished.

"They've come around and they say they love it," she said of her fellow parishioners.

Even before Weise took ill and ultimately passed on, the repainting became a community effort. Materials, tools and labor were all donated, by Catholics and non-Catholics alike.

"The average age of the people painting was almost 70," Mitchell noted. Ladders, time and equipment were contributed by many, but she pointed out in particular Lloyd Ward, Liz Guyor, Lanny and Charlie Hamley, and John Waddington for their help with the painting and other projects.

"No matter who we asked, they'd say 'sure,'" Morrison said.

One of Weise's projects was opening up the entryway ceiling, and expanding the confessional area.

"He moved one wall and opened this up," Mitchell illustrated.

Weise also made an effort to restore the pressed tin paneling original to the building. Sections of tin and odd pieces of matching trim were scoured for and found in storage and around the parish, to be used where possible in the sanctuary.

"He was instrumental in getting that going," Mitchell said. "Father would find any little piece he could in the attic."

Volunteers helped retile the entryway, again donating time and materials to the effort. Work was undertaken when people had time, and revolved around the church schedule so as not to disrupt Mass.

"People that weren't Catholic came and helped," noted Mitchell. "We were scrambling on Friday or Saturday so people could have church on Sunday." 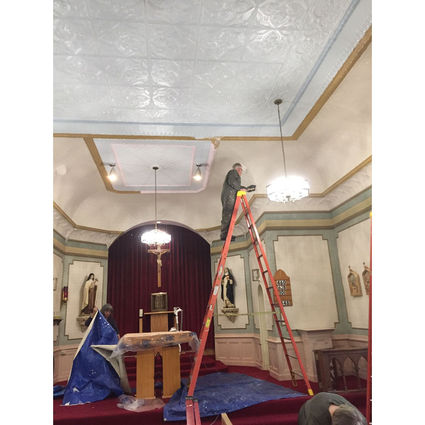 Keene Kohrt applies paint to the apse of St. Rose of Lima Catholic Parish during its recent renovation. He was one of a number of people who volunteered time and resources to update and repair the church.

"There's some lintels and some trim work that needs to be done yet," Morrison said, but work at St. Rose is about finished for now. Other projects will be inevitable with such an old property, but for the present the congregation will be able to worship in peace.

"It's a work in progress," Morrison said.

A bronze plaque dedicated to Fr. Monroe, the priest who had helped establish the parish's new building after it was built before his death in 1940, has been restored next to the entry's Jubilee Door. Mitchell and Morrison both felt it would be nice to remember Weise in the same way, for the work he had done with the building.

"I think that's one thing we should get for him, is a bronze plaque," Mitchell said. His efforts and constant projects helped make the building more efficient and nicer to worship in, and were appreciated by the congregation. "I told him he's going to be the patron saint of caulking," Mitchell recalled.