Some fireworks in queen competition, but overall a blast 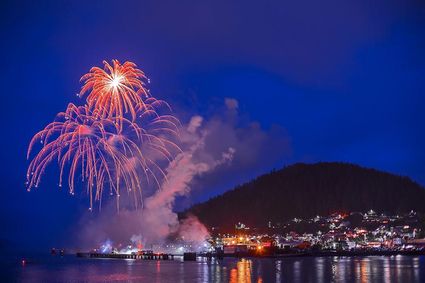 Concussive pyrotechnics go off over Wrangell on Monday, despite the evening's rainfall. This year the fireworks display was held the day before Independence Day, due to scheduling conflicts. It still drew in a big crowd around the city dock and barge yard for about an hour.

On Monday evening more than a month of hard work for two of Wrangell's July 4 Royalty candidates came to an end, with the year's queen and princess each crowned.

Future high school senior Charley Seddon was crowned queen, after selling 46,463 tickets during the month of June. Named the celebration's princess, recent Wrangell High School graduate Hailie Davis sold 44,330. A tight race throughout, together the girls raised over $90,000 for the competition.

A longstanding tradition for the town's Independence Day celebration, the royalty contest each year helps fund the next year's events. It...