Wrangell named 'community of the year' at SEC 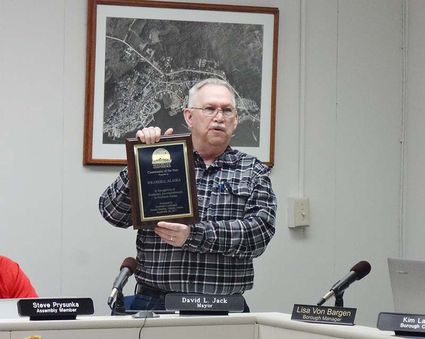 At Tuesday's meeting of the Wrangell Assembly, Mayor David Jack displayed the "Community of the Year" award given the city by Southeast Conference last month. He lauded the efforts of city staff in their role supporting various projects, and the wider community for persevering after the loss of its mill. A break was enjoyed during the meeting, where those in attendance got to share a congratulatory delicious cake prepared by resident Dan Reed.

Every year Southeast Conference presents a number of awards to municipalities, businesses and individuals for their contributions to the region. At this year's annual meeting in Haines last month, Wrangell was among the recipients, being named the organization's "Community of the Year" for 2017.

Accepting the award on the city's