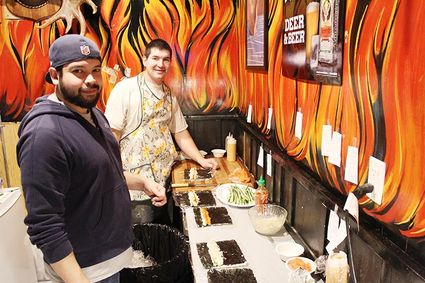 Aaron Angerman and Jared Gross build a miniature assembly line for rolling sushi at Rayme's Bar on Sunday, raising funds for cancer care. After rolling each one gets sliced into bite-sized portions, and just under 140 such rolls in all were served.

A home-harvested fundraiser raised just over $3,800 for a child's medical expenses on Sunday, which follows another effort in October that had raised $1,800.

The funds are for Taryn Lee, a five-year-old diagnosed with spitzoid melanoma earlier this summer. According to St. Jude Children's Research Hospital, melanoma is the most serious form of skin cancer due to its tendency to spread quickly. While rare among the general population for skin cancers, it is even more rare among pediatric cases, particularly for the very young.

Taryn is the daughter of Colton and Camilla Lee, a Wasilla couple...