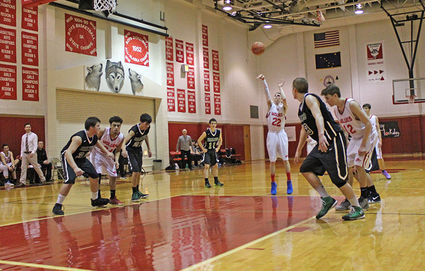 Senior Brian Schwartz shoots after a foul late in Thursday morning's game against Haines. After losing to the Glacier Bears in a close game the previous evening, the team was able to win one of its own during the day.

Hosting Haines, it was the Wolves' first home games after several weeks on the road.

Playing on Wednesday and Thursday due to travel considerations, both games ended up being close ones for the two teams.

"They actually match up with us pretty well," said Angerman.

Haines senior Dylan Swinton was a leader on the opposing side of the court, backed up by a pair of talented freshmen, he said.