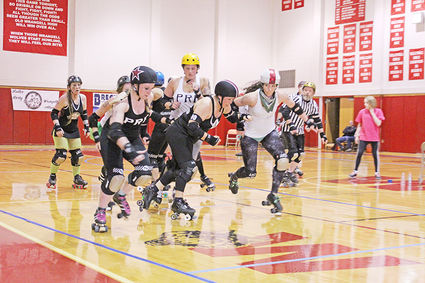 Women with the Ragnarok Rollers and Garnet Grit Betties take part in a friendly mash-up bout in Wrangell on St. Patrick's Day. At right in white, Petersburg player "LudaFrisk" sees an opportunity to imminently curtail the jam of "Fabigail Force," in black at left. The bout was Fabigail's first-ever. Both derby girls hail from Petersburg, as were eight out of 10 participants in Saturday's event. At center, Petersburg player "Deckem" suffered a serious injury during the game's second half, with a torn calf muscle. She was taken to Wrangell Medical Center by ambulance for care, after which the game was concluded prematurely. With two players on this year's roster, the bout will be the Betties' only to host for the season