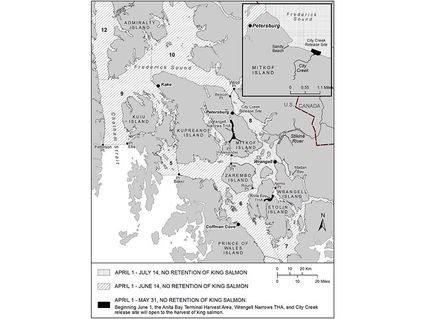 Showing management districts in the Wrangell and Petersburg area, this Department of Fish and Game map outlines when districts will reopen to sport harvest of king salmon. The blacked-out sections of water are terminal harvest areas, which are scheduled to reopen first on June 1. The hashed sections of water will come next, reopening on June 15. Finally, most of District 8 and a portion of District 7 will reopen on July 15, being closest to the Stikine River.

The Alaska Department of Fish and Game announced late last week the extent of its expected king salmon sport fishing restrictions for this season.

The region wide closure to retention of Chinook began on Sunday, April 1, to last through the first half of the summer for some waters. Citing a poor preseason forecast, ADFG has decided to close the majority of marine waters within the Petersburg-Wrangell area, not only in District 8 but also in 6, 7 and 10. (see map)

The lengthiest closure will focus on districts 7 and 8, lasting through July 14.

"That goes one step farther to provide some addi...