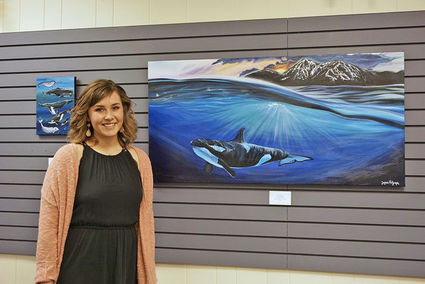 Jayne Fritzinger at her first solo show, alongside her "Orca Love" piece, at Firelight Gallery and Framing in Petersburg on Friday.

A 23-year-old artist from Wrangell had her first solo show in Petersburg on Friday, where she was stunned by the turn out and support.

The artist, Jaynee Fritzinger, was nervous for her first show at Firelight Gallery and Framing in Petersburg. For two weeks before, she had been waking up before 5 a.m., painting about 10 hours a day.

Fritzinger brought about 13 original paintings to Petersburg, selling more than half so far, along...