City looking at snips and cuts as budget patched together 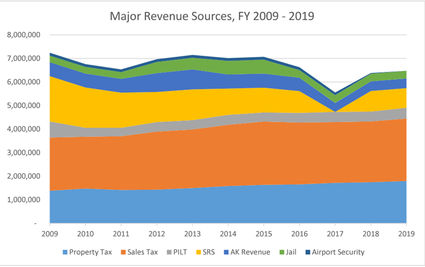 Included in this coming year's draft budget for Wrangell, a decade's revenue sources are tracked. While sales and property taxes have increased slightly, reductions to state and federal funding sources have put a crimp in the city's clutch purse.

Second and third budget workshops this month were held Monday and Tuesday night as the city moves closer to a final budget draft for the coming year.

A fourth workshop has been scheduled for this evening, to deal with the Wrangell Public Schools budget. Afterward a public hearing of a draft completed budget is anticipated next Tuesday evening during the Wrangell Assembly's regular 7 p.m. meeting.

During Monday's session, assembly members and city staff contemplated its revenue outlook for the coming year (see graph). Over the past decade, reductions to state and federal funding sources have...