Community asked to conserve as city goes back on water watch 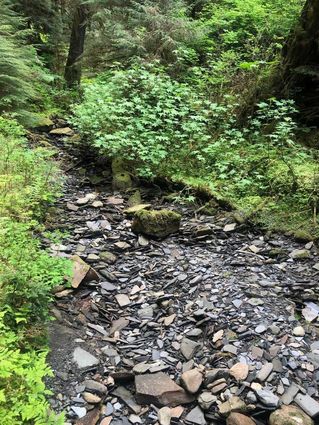 A dry creek bed, near Wrangell's upper reservoir. Borough officials declared a Stage I water watch last week, in response to ongoing drought conditions across Southeast Alaska. The snowpack was inadequate to refill the community's water supply, according to Mayor Steve Prysunka, and weather forecasts predict dry weather with intermittent, but minor, rainfall. A town hall meeting to discuss ongoing conservation efforts and the city's water situation has been scheduled for June 12.

rangell went on a water watch for a few weeks back in March. Due to a forecast of insufficient rainfall, and ongoing drought conditions across Southeast Alaska, a water watch has been declared once again. As part of the water watch, there will be a town hall meeting to discuss conservation efforts at the Nolan Center on June 12, at 6 p.m.

This is a Stage I water watch, the lowest that city officials can declare. In a statement on the borough's website, city officials have requested that community members all find ways to conserve water. This includes fixing leaky faucets and pipes, washing...