Flag Day at the Elks Lodge 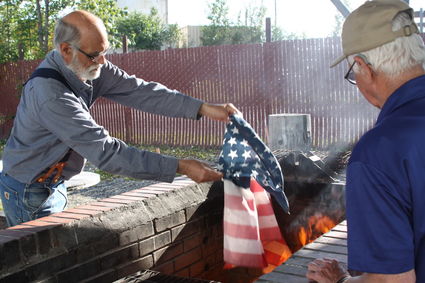 American Legion Members Dave Hartong (left) and Harry Churchill (right) participated in the Elks Lodge's Flag Day ceremony last Friday, by helping to retire several American flags which were too old for use. One of the proper ways to dispose of an American flag is to burn it. According to Hartong, they had gathered about a dozen flags for the retirement ceremony.

The Wrangell Elks Lodge hosted a Flag Day ceremony last Friday, June 14. Flag Day is a national holiday to commemorate the adoption of the Stars and Stripes as the country's national flag. According to military.com, commemoration of Flag Day dates back to the 1880s, when teacher BJ Cigrand organized a group of Wisconsin students to observe the flag's birthday. The practice grew and spread across the country until it was officially recognized as a holiday by President Woodrow Wilson in 1916.

The Benevolent and Protective Order of Elks requires that their lodges formally recognize Flag Day....