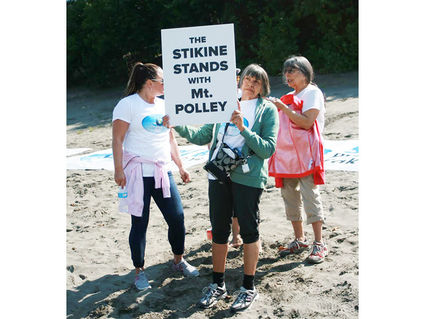 Lovey Brock holding a sign at the Stikine River Rally last Sunday. The rally was held in commemoration of the fifth anniversary of the Mount Polley Mine disaster, and to highlight concerns of mining having a negative impact on the Stikine River.

It was a perfect day to be outdoors last Sunday, Aug. 4. The sun was shining, the water was smooth, and the temperature was warm. Besides the nice weather, concerned locals also spent the day outdoors to raise awareness for another issue: Mining along the Stikine River.

The Southeast Alaska Indigenous Transboundary Commission, SEITC, held a rally upriver last Sunday. Tis Peterman, CEO of the commission, said that the Stikine was recently listed among the top 10 endangered rivers in the country by American Rivers, a conservation organization that has worked to protect America's rivers and fr...