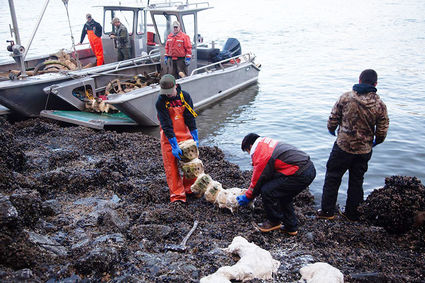 Courtesy of the Forest Service

Members of the Forest Service, as well as some high school oceanography students, went to gather the bones of a dead gray whale that beached near Wrangell.

Monday, Oct. 7, members of the Forest Service and high school oceanography students, boated over to the east side of Wrangell, near Channel Island, to retrieve the remains of a gray whale that washed up back in June.

The whale, a 30-foot male, was one of the victims in a UME, or "unusual mortality event" that has seen numerous gray whales die. According to NOAA, as of Sept. 30, there have been 47 gray whale strandings in Alaska, or 212 across the whole American, Canadian, and Mexican west coastline. The causes of death among the whales has not been consistent, according to NOAA, so researc...