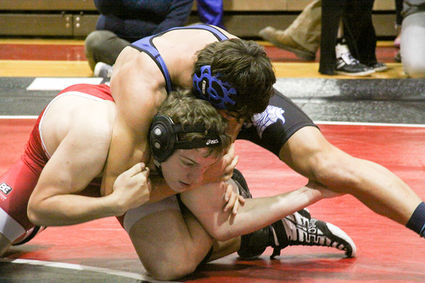 Rowen Wiederspohn attempting to break out of a hold by Kole Sperl, of Petersburg.

Wrangell was host to the Tom Sims Invitational wrestling tournament this past weekend. Teams from all over Southeast Alaska, 11 in total, came together to officially kick off the high school wrestling season. Jack Carney, assistant coach for the Wrangell Wolves, said that the teams all wrestled some on Thursday and Friday, before the official tournament on Saturday, Oct. 19.

The Wolves took second place overall, according to Carney, behind Ketchikan High School. Among the smaller 1A, 2A, and 3A schools, he said, they were tied for first place.