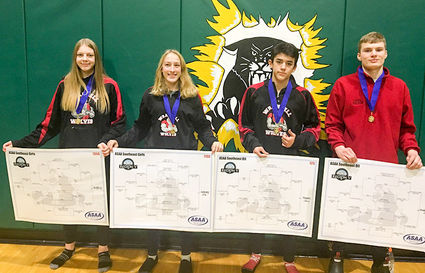 The four regional champions of the Wrangell Wolves wrestling team (left to right): Jamie Early, Liana Carney, Ryan Rooney, and Hunter Wiederspohn. According to Assistant Coach Jack Carney, 11 wrestlers in total have qualified for the state tournament in Anchorage.

The Wrangell Wolves wrestling team claimed first place among 2A schools in regionals this past weekend, at Craig. According to Assistant Coach Jack Carney, on the Wolves' Facebook page, this is the fifth time in team history that they have taken the title. The team also received a sportsmanship award thanks to their performance, he said. Not only that, but four team members claimed personal championships in their brackets.

Ryan Rooney took first place in the 125 bracket. He received a bye in the quarterfinals, and beat Trey Dock of Mt. Edgecumbe in the semifinals. He won the final match by...