Several wins for Lady Wolves at Rally the Regions 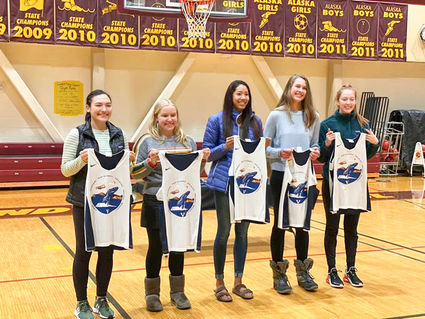 Photo courtesy of Rally the Regions

The girls' All Tournament Team of this year's Rally the Regions. The all tournament teams are made up of players who show considerable qualities, on and off the court, during the rally. The team is as follows (left to right): Jewel Wilson, Unalakleet, Most Valuable Teammate; Meghyn Parker, Petersburg, Outstanding Servant Leader; Kaia Beebe, Tanalian, Total Effort; Kiara Harrison, Wrangell, Best Attitude; and Kaylyn Easterly, Wrangell, Student Athlete.

The Wrangell Lady Wolves spent the beginning of 2020 in Anchorage, taking part in the Rally the Regions Hardwood Classic. The tournament, held on the first four days of January, brings together schools from across the state, from Southeast to western Alaska. The Lady Wolves won the championship last year, in 2019, and were returning to defend their title this year. While the championship went to Unalaska this year, Wrangell still saw several big wins during the tournament.

"We had four really good matched games," said Coach Laurie Brown. "It was a really good experience to help get us ready...