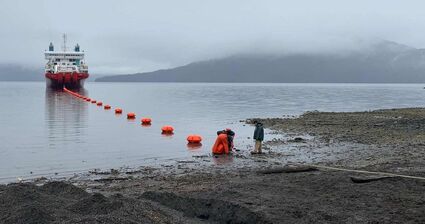 The Cable Innovator arrived in Wrangell on Sunday for a week-long project to relocate about 14 miles of GCI fiber optic cable to a new route on the south side of Woronkofski island. The work included trenching the beach near Shoemaker Bay (above) to run the cable ashore to a new connection point. The specially built ship for cable-laying work serves West Coast telecommunications companies.

A ship built especially for laying fiber optic cable on the ocean floor was in front of Wrangell this week, moving GCI's Seafast communications cable into a safer position away from underwater power lines and the risk of sediment avalanches.

The 477-foot-long, 78-foot-wide Cable Innovator, built in a shipyard in Helsinki, Finland, in 1995, will relocate about 14 miles of cable from its old starting position near Cemetery Point in Wrangell. From there, it wrapped around and down the west side of Woronkofski Island and south through Stikine Strait on its way to Ketchikan.