Volunteers give Jason Gadd his own special 'Cars' room 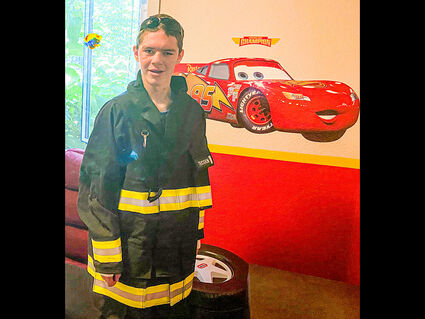 It was a double special day for Jason Gadd, 16. The Make-A-Wish Foundation sent him supplies for a theme makeover of his bedroom into his favorite film, "Cars," and the Wrangell Volunteer Fire Department gave him a ride aboard a fire truck to his home, accompanying the Alaska Marine Lines van carrying the "Cars" supplies.

The community came together last week to help make a wish come true for Jason Gadd, 16, with a parade in his honor and a bedroom makeover thanks to community volunteers and the Make-A-Wish Foundation.

"I don't even have words to describe how thankful I am to everybody who came out to help," Dacee Gustafson, Jason's mother, said. "He's shown emotions and things we haven't seen in years that day."

Jason has Dravet Syndrome, Gustafson said, which causes unpredictable seizures. This has limited him compared to other kids his age, and can be quite dangerous. She put in an application with the Ma...