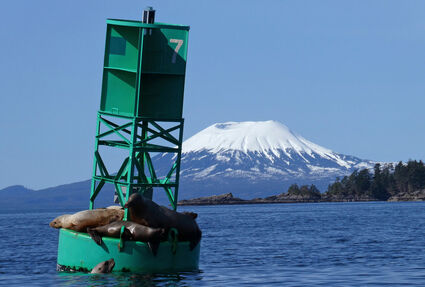 With Mount Edgecumbe in the background, a sea lion pops its head out of the water next to a buoy crowded with other sea lions in this 2018 file photo. A swarm of hundreds of small earthquakes were reported near the Mount Edgecumbe volcano 15 miles west of Sitka. The reason for the swarm is not known, officials at the Alaska Volcano Observatory said.

The Alaska Volcano Observatory said that as of last Thursday the number of earthquakes under Mount Edgecumbe was declining.

The earthquake activity is beneath the 3,000-foot high dormant volcano 15 miles west of Sitka on Kruzof Island.

The volcano observatory sent out an information statement a day earlier about the "swarm" of small earthquakes under Mt. Edgecumbe, with an accompanying message that there is no cause for alarm by the public.

"We're getting information out and trying not to alarm people," said David Schneider, a research geophysicist at the Anchorage volcano center.