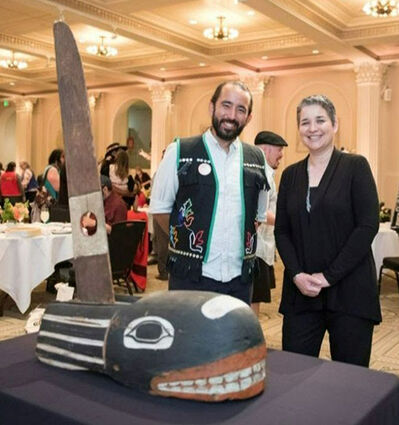 Michael Hoyt (Tlingit and Inupiat) and Kathleen Ash-Milby, the Portland Art Museum curator of Native American Art, stand beside the Killerwhale Hat at a museum event last month recognizing the repatriation to Wrangell of objects in the museum's collections.

Culturally significant objects formerly in collections of the Portland Art Museum arrived in Juneau on June 8 on their way back to Wrangell, whose Tlingit artisans had fashioned them.

After years of negotiations following a claim originally filed in 2002 and accepted by the museum in 2019, the objects, including a Killerwhale Hat, have been repatriated to the Naanya.aayí clan in Wrangell, where they had originated.

COVID-19 complications delayed the transfer until now, according to a museum statement released June 10.

"We are so grateful for all of the work that was done to return the Naan...