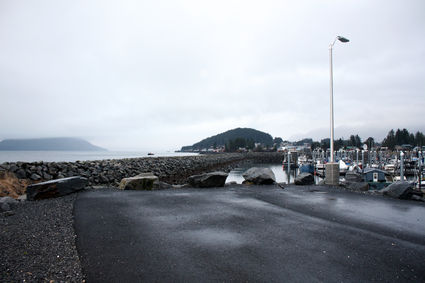 The Port Commission is moving forward with plans to build a Mariner’s Memorial on the southwest end of Heritage Harbor. The location for the planned memorial can be seen in the photo above.

The Wrangell Port Commission discussed the storage of boats in the Ritchie Yard at the corner of Case Avenue and Shakes Street during their regular meeting on Feb. 11 – and also talked of plans to open up new lease space at The Marine Service Center.

Harbormaster Greg Meissner said the reason for opening up new space for storage, as well as four new working lease areas is simple.

While the MSC space leases will be used for repair work, the Ritchie property will be used solely for boat and equipment storage. The four new lease spaces would encompass areas that are 70-by-80, 60-by-60, 50-by-50, 40-by-50 feet in size.

A decision on whether to move ahead with such a plan was put off until the commission’s next meeting.

In his regular report to the commission, Meissner provided an update on a number of items, including the status of Phase II of the MSC concrete project.

“The Phase II concrete project for the boat yard is out to the public and bids will be opened on March 5 at 2 p.m.,” his report states. “The work will be similar to the last phase, but a larger area. The work could start as early as mid-April and should be complete by November depending on the amount of area awarded.”

Meissner added that the areas due to be paved will be scheduled to avoid major impacts to vendors who lease space for repair work at the yard.

“We will again provide a project schedule to all the lessors and vendors so regardless of what you hear they will all be aware of what is going on so they can schedule accordingly,” Meissner added.

Along with other Borough officials, Meissner traveled to the Seattle Boat Show last month – and brought back good news about boat owners looking to Wrangell as an option for their vessels.

“Overall there was a fair amount of interest which is normal,” Meissner said. “I have not talked to each person that worked the show but I think it was a success. Many boaters are looking to leave their boats in Wrangell for the winter or even taking a stall and leaving them here permanently.”

Meissner’s report also stated that the broken Reliance hoist is under repair and will be reassembled as soon as parts are received.

“The same part that we keep having trouble with is being replaced with a new one,” he said. “This is not an off-the-shelf part and will be manufactured.”

Regarding the planned Mariner’s Memorial at Heritage Harbor, Meissner told the commission that a custom-built, pre-fabricated unit could cost between $100,000 and $120,000. Commission president Brennon Eagle asked Meissner to have a more solid cost estimate available at the next meeting.

The next meeting of the commission is set for March 11 at 7 p.m. at City Hall.