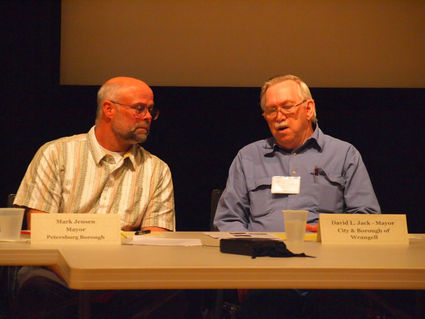 Petersburg and Wrangell officials debated Tuesday the future of the Thomas Bay Power Authority in a joint workshop session.

The at-times contentious meeting called into the question the future of the TBPA as an independent entity from the larger Southeast Alaska Power Authority. A May 6 vote by Petersburg to withhold its portion of the TBPA budget triggered the workshop session. Council members said concerns about the role of the TBPA triggered the 6-1 vote against funding the portion of the TBPA budget labeled “non-net billable,” which includes administrative costs and the costs of meetings for the authority’s governing board, among other things.

Opponents of the TBPA, like Petersburg assemblyman John Hoag, questioned whether the TBPA provided anything more than an unnecessary level of government bureaucracy.

“I don’t see a reason why the TBPA should stay in existence,” he said.

TBPA operates the Tyee Hydroelectric Plant on a contract with SEAPA, who owns and is responsible for the facilities to the Federal Energy Regulatory Commission.

Supporters of the TBPA, like Wrangell assemblyman James Stough, said the TBPA gave residents of northern communities within SEAPA a necessary representation to energy decisions for Wrangell and Petersburg.

“I was at your indoctrination session,” Stough said to SEAPA CEO Trey Acteson. “My concern is that our reps don’t represent our communities.”

Stough used the term “indoctrination” at least twice during the meeting to refer to training for SEAPA board members, who are appointed by city councils, but can only be removed by an action of the SEAPA board or personal resignation.

Three citizens who spoke at the meeting said they worried about higher energy bills and job security for the TBPA’s seven full-time employees.

“My question is, how will reducing jobs in Wrangell, and Petersburg as well, really benefit either community economically?” said Dorothy Hunt-Sweat.

Acteson said neither jobs nor higher rates were in the cards for Southeast residents.

“I’m not interested in getting rid of perfectly good employees,” he said. “They’re hard to find.”

Acteson presented a plan whereby SEAPA would absorb pension liabilities totaling more than half a million dollars and other costs, and said he would recommend adding an additional full-time job to the payrolls at the Tyee Hydroelectric Plant. SEAPA was willing to make the pension liabilities in the form of a lump sum payment to Wrangell city, which currently has the TBPA employees on the books, Acteson said, in both his presentation to the workshop and a memo addressed to TBPA president John Jensen

“The memo … was a way to get the sides talking, and I think that’s the first step,” Acteson said. “They’re just options, is all.”

SEAPA would also use an about-$260,000 insurance rebate from the Alaska Power Association’s ARECA Insurance Exchange to offset the impact of those insurance payments to utilities in Ketchikan, Petersburg and Wrangell.

The question of responsibility to the community surfaced repeatedly over the course of the meeting, and spilled over into a Wrangell Borough and City Council meeting later in the evening. One council member pointed out that the board members for SEAPA – voting member Brian Ashton and alternate Clay Hammer – were also board members for the TBPA.

The Wrangell council’s representative to the board – composed of three members from Ketchikan and one each from Petersburg and Wrangell – was also on hand to discuss his role, after a long absence because of personal reasons.

“The way I see it, SEAPA’s best interests are the community’s best interests,” said Brian Ashton. “If it were ever a question, if you ever gave me and order I couldn’t carry out, I would resign.”

By the end of the meeting, Petersburg officials seemed likely to stick to their course of action.

“I don’t see what we stand to lose or gain by this decision,” Hoag said.