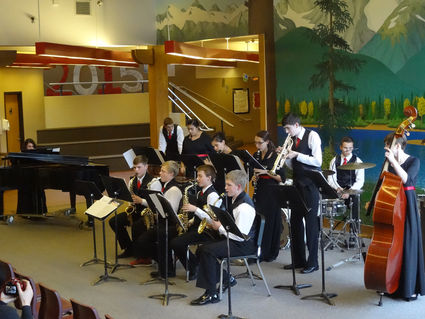 Wrangell High School's regular ensemble is joined by members of the jazz band April 23, playing a collection of vibrant, percussive pieces from the former Yugoslavia. The concert was held for parents and supporters at the school following the music program's return from Southeast Music Fest in Juneau.

Parents and other supporters of the arts came to the high school commons on April 23 to give Wrangell High School's music students the chance to reprise their award-winning performance in Juneau earlier in the week.

The band earned three "superior" ratings from adjudicators at this year's Southeast Music Fest, a competition involving the bands and choirs from schools around the region.

"This is the first time in the seven years I've been here that the band earned the score of three superiors," said the music program director, Tasha Morse.

A panel of three judges rated the group's performanc...