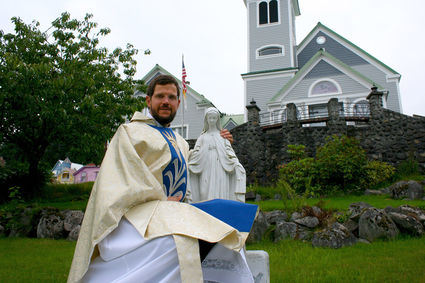 Fr. Thomas Weise stands outside the front of his parish, St. Rose of Lima Catholic Church. In 2012 Weise received a grant from the Rasmuson Foundation to continue modernization of the historic building, Alaska's oldest Roman Catholic church.

Catholic parishioners of Wrangell and Petersburg were disheartened to learn the priest serving both communities has been hospitalized while visiting family in California.

Fr. Thomas Weise, 46, was taken ill late Nov. 25 after experiencing cardiac arrest. As of Dec. 1 he remains in intensive care, and is in a critical but stable condition.

Weise is the pastor at St. Rose of Lima parish in Wrangell and St. Catherine of Siena parish in Petersburg, splitting his time between both communities. He was ordained by the Diocese of Juneau in 2002, and was formerly the pastor of the Cathedral of the Nativity of the Blessed Virgin Mary in Juneau.

Though dividing his time between two communities, over the past five years Weise has made a significant impact in both.

"He just gives wonderful homilies, and he's a real teacher when it comes to the Bible," said Darlene Whitehorn, a Petersburg parishioner.

Every parishioner interviewed agreed Weise has been a hard worker outside of his clerical duties. He has led renovation work at St. Rose of Lima since 2011, replacing old siding and insulation and making the church more efficient to keep heated. Weise has done similar work at St. Catherine of Siena, and has never been short of help at either project.

"He doesn't have any trouble getting help," said Whitehorn. "He enjoys being social and being out there. You'll find him at most events."

An avid outdoorsman and kayaker, Weise has made friends in both communities, Catholics and non-Catholics alike.

"I have been overwhelmed by how many lives he has touched," said Peggy Mitchell, a Wrangell parishioner. "Not just in Alaska but all over."

On Facebook she said friends and well-wishers have been sharing words of encouragement and expressing prayers for Weise's swift recovery.

As actively involved as he has been, Mitchell said this was to be the first Thanksgiving Weise was able to spend with his family since ordination.

"It was rather fortunate he was there when this happened," she said.

"Some of us gather to say the Rosary for him," said Rita Byrer, from Petersburg.

"We're all praying for him and waiting for the doctors to bring him along," said Mike Monagle, deacon with the Diocese. "I think we're all kind of waiting to see what's next."

He explained a schedule is being arranged for the bishop's approval, but that the Wrangell and Petersburg congregations will have a parish priest to deliver services through Christmas and into the new year. "Someone will be there for sure," Monagle said.

One possibility is Fr. Michael Galbraith, newly ordained by the Diocese in October.

"Given the situation, and that he's in Ketchikan, that's a real possibility," said Monagle.

As new information about Weise's condition becomes available, the Diocese will make the news public at http://www.dioceseofjuneau.org and related social media sites. Cards, letters and notes of encouragement can be sent to him and his family at 672 Howard Street, San Luis Obispo, Calif. 93401.