Ringing in the season: December calendar filled with festivities 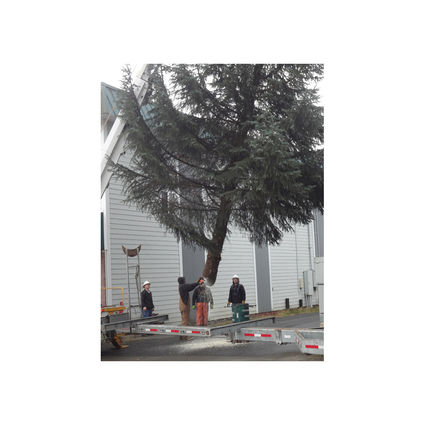 Dwight Yancey gives the town Christmas tree a final trimming before Wrangell Municipal Light and Power sets it in place Monday morning. Before being cut down to size, the 24-year-old spruce stood at 54 feet and is one of the tallest in the region this holiday season.

With the advent of December, Wrangell's streets and storefronts have begun taking on a more festive appearance ahead of the Christmas season.

The tree which serves as the centerpiece of the community's Midnight Madness celebration tomorrow evening was cut down, moved and re-raised at the Elks Club by Wrangell Municipal Light and Power on Monday.

Despite gusts of up to 31 miles per hour, the work crew managed to trim and place the 54-foot Sitka spruce, which was harvested from federal forest at the Nemo Loop Road.

Electrical superintendent Clay Hammer explained the trees growing there are second-growth, being managed since the area was first cleared some decades ago. They make ideal Christmas trees, as he said it would be difficult to find an old-growth tree of a similar size in as fine a shape.

"They seem to be very well-rounded. Nice shape, nice height," he said of the regrowth.

Despite being scarcely two-thirds the height of last year's tree, Hammer reckons this year's will still be the tallest in the region. Counting up the rings after felling it, the tree turned out to be 24 years old. "I think that's the youngest tree that size we've ever got," he noted.

While last year's tree had been on state-managed lands, this year Wrangell had to approach the U.S. Forest Service for permission to harvest its tree.

"They've been very, very good at working with us on it," Hammer said, with the local district giving verbal approval after an exchange by email.

Now downtown, the tree will be decorated using ornaments crafted by students of Evergreen Elementary School, and the light department will hang its bulbs in preparation for the lighting during tomorrow's Midnight Madness.

The yearly event is sponsored by the Chamber of Commerce, and formally kicks off Wrangell's holiday season. A variety of local vendors will be holding a bazaar inside the Stikine Inn between 3 and 10 p.m., purveying an assortment of foodstuffs, crafts and other gift ideas. Other shops around town will be holding sales and special offers as part of the late-night event.

"Most of the downtown merchants are having extended hours," explained Chamber manager Kelly Weatherford.

For the tree-lighting Santa Claus himself will be on hand to flip the switch at 6 p.m., and will afterward be hearing gift requests and taking pictures at the Wrangell Cooperative Association's new Cultural Center until 8:30 p.m. The Chamber is covering costs of one photo for each child, though additional snaps can also be purchased. Hot chocolate and marshmallows will be provided, along with cookies and other seasonal treats.

Marshmallows will also be on-hand on Front Street, where revelers are invited to mingle around bonfires put out by the city and enjoy carols sung by the Wrangell High School choir. Outside of Wells Fargo, the fire department plans to put out an interactive booth to help raise funds for the Scott Firefighter Stairclimb in Seattle next year. The annual pledge drive raises money for researching leukemia and other blood cancers.

The Chamber will be raising money as well, raffling off a sack of new toys through the month. The drawing will be held during the Jolly Shopping sales on Dec. 21.

"There's some great stuff in the bag," said Weatherford.

After the Midnight Madness ends, Santa won't be heading back to the North Pole quite yet, staying on through Saturday evening for the WCA Christmas party at the SNO Building at 6 p.m.

Cohosted with Tlingit-Haida Central Council, the Alaska Native Brotherhood and Sisterhood, and SEARHC, the party will feature crafts and games for kids and a meal of turkey, ham and other fixings will be provided.

"We want to close out the year doing something fun," said Aaron Angerman, tribal administrator for WCA. All are welcome to attend, and people may bring their favorite dessert if they wish.

On Sunday, the Wrangell Ministerial Association will be hosting the annual Dove Tree Ceremony at the Nolan Center at 2 p.m. Held each year since 2003, residents are invited to add the names of departed friends and loved ones to paper doves for the memorial ceremony. The tree will then remain on display through the holiday season into January.

A little later, everyone is invited to attend the 20th annual Wrangell Community Chorale concert inside the Nolan Center at 4 p.m. Members of the community will be showcasing a variety of musical talents to mark the season.

In the Nolan Center entryway, Christmas Tree Lane will be raising money for the local Hospice. The annual auction of trees, wreaths and other decorations is the program's only fundraiser for the year, supporting its activities and updating equipment for the loan closet.

From Tuesdays through Saturdays, noon to 5 p.m., people can peruse and bid on decorations sponsored by businesses, organizations and individuals. The auction ends on Dec. 18, after which bid winners can take their decorations home for the holidays.

"They could still use a few to go there," said Nolan director Terri Henson. Those interested in sponsoring a tree can contact the center's office for more information.

Area schools and churches are also getting into the spirit of things. The Wrangell High School music program will put on its Christmas concert on Dec. 8 at 7 p.m., which will be preceded by a craft auction of items produced by the art and industrial arts classes at 6:30 p.m. The auction will conclude 15 minutes after the concert, with proceeds going toward their respective programs.

Students at the elementary school will put on their annual Christmas program on Dec. 10 at 7 p.m., and on Dec. 12 the local Head Start will be hosting a pasta dinner and art auction at the American Legion Hall at 6 p.m. Ornaments, drums and framed art created by the program's students will be sold, with proceeds going toward new playground equipment. The Head Start kids have also been warming up their sign language skills and singing voices in preparation for a few carols.

Harbor Light Assembly of God Church will be putting on a play at the Nolan Center on Dec. 15 at 6:30 p.m., called "A Tale of the Three Trees." Admission is free to the public. 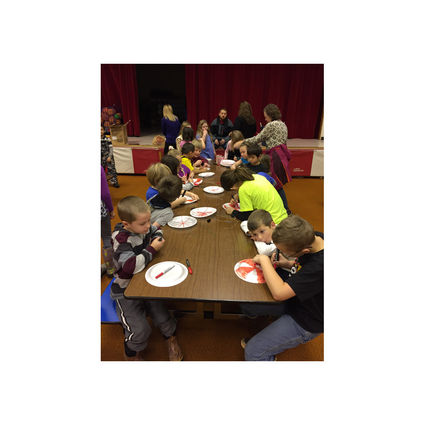 Students at Evergreen Elementary School create oversized holiday baubles from paper plates on Nov. 18. The school created a number of ornaments for use on the town Christmas tree, which will be lit up during Friday evening's "Midnight Madness" festivities.

The local Salvation Army is still taking applications for its annual Christmas Basket drive. Serving around 60 families last year, the baskets each provide a turkey dinner with full setting, as well as children's toys. Students at Stikine Middle School have been holding a canned food drive to support the program, though the church is still accepting donations of food or money. Applications are available at the Salvation Army, Hannah's Place and local schools, and are needed by Dec. 11. For further questions call majors Scott or June Nicloy at 874-3753.

The shopping aspect of this holiday season culminates in Jolly Shopping weekend, Dec. 19 to 21, with another bazaar for local vendors to be held at the Stikine Inn on Dec. 20. Last-minute shoppers will have a chance to win $500 in the Chamber's drawing for every $50 spent at participating businesses.

The Wrangell Sentinel will also be setting up a collection box at its Front Street office for letters to Santa, which will be run in the Dec. 24 holiday edition as space is available.