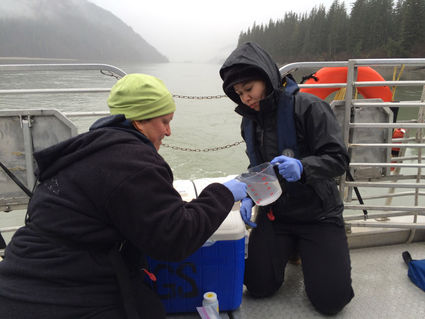 Cathy Needham and Jennifer Hanlon collect samples from the Stikine River on Nov. 2 for the first round of what they hope will be a three- to five-year water quality study. Organized through Tlingit-Haida Central Council, the program intends to provide baseline water quality data for the Stikine, Unuk and Taku rivers ahead of major mining operations upstream in Canada.

The second round of water quality testing was conducted on the Stikine River by Central Council's Native Lands and Resources Department (NLRD) Dec. 9.

"The reason we started this project was prompted by what's going on upriver in British Columbia," explained Jennifer Hanlon, an environmental specialist with NLRD heading the study.

The Red Chris mine is the latest large-scale mine to begin production, and the sixth in British Columbia to have started since 2011. Located 11 miles from the headwaters of the Stikine River, the open-pit copper and gold mine began limited operations in February and achieved completion on Dec. 1.

The NLRD baseline testing is part of a three- to five-year study identifying and measuring the levels of heavy metals and other toxic substances on the Stikine, Taku and Unuk rivers. Site visits to both the Taku and Stikine will continue on a monthly basis as weather and time permit, while logistics for study on the Unuk River are still in development.

The study's goal is to produce statistically valid data with which to inform regulatory agencies on the impacts from upstream mining development. The data can also be used to aid the management of these rivers, and will be shared with the State of Alaska, regulatory agencies in British Columbia, the Environmental Protection Agency and the broader public.

On her site visits Hanlon is accompanied upriver by consultant Cathy Needham of Kai Environmental Consulting Services, who has 15 years of experience with water quality testing and soil sampling.

The two travelled to the Stikine and Taku rivers to collect their first set of samples in early November.

"There is data on the Stikine, but it is a patchwork," Needham explained.

Two testing sites have been chosen for each river being studied. On the Stikine, this is the United States Geological Survey gauge and the river's confluence with Goat Creek.

At both sites the team takes samples to measure the water's chemistry. These are sent to a laboratory in Anchorage, where the samples are measured for pH and alkalinity, and tested for the presence of dissolved metals, mercury, hydrocarbons and other contaminants.

Flow rate is one of the factors taken into account, which varies seasonally. Needham explained winter samples are important because there is generally little data available during low-flow conditions. And low-flow is a better opportunity to detect contaminants, she explained, because the river is significantly less diluted. Having a certain number of samples taken during such times strengthens the data set overall.

To be statistically rigorous, monthly samples over the course of three to five years would be best. Year one of the study has been funded by a Bureau of Indian Affairs grant, but Hanlon said other funding sources will have to be found for future years.

While laboratory testing can be expensive, she explained the logistical expenses are even greater. The financial constraints of testing factored into selection of the sampling sites, and the locations were found along the main rivers rather than further upstream in their tributaries for greater efficiency.

"This allows us to do more samples over time than over space," Hanlon said.

"We're really relying on local knowledge to know what is practical or safe," said Hanlon. During the summer the team harbors hopes to cooperate with the U.S. Forest Service in its studies.

On the Stikine their counterpart is Chris Hatton, an environmental technician for Wrangell Cooperative Association's IGAP office. When Hanlon and Needham came for their November sampling, she kept records and learned how to use some of their instruments.

"Just the familiarity with the equipment is pretty important," Hatton said. IGAP will be looking at local water quality issues in the upcoming year, and plans to conduct some tests on rural water sources and the public tap at 9-Mile Zimovia Highway.

Water quality has been a top issue with Central Council, one whose importance was underscored in August 2014 when another B.C. mine, Mount Polley, experienced a catastrophic tailings breach. Billions of gallons of contaminated water were released into surrounding water systems, and locals to date have not been willing to eat its salmon. Fears are that something similar will eventually happen at Red Chris, which along with Mount Polley is also operated by Imperial Metals.

The Red Chris is anticipated to produce copper and gold at a milling rate of more than 33,000 tons per day over three decades, which on the one hand is counted a major economic opportunity for the province. But the mine is also expected to produce several hundred million tons of acid-generating waste rock, which will be submerged and retained in nearby Black Lake.

Downstream, subsistence and commercial fishermen are concerned this will find its way into the Iskut River, a tributary of the Stikine, and so threaten the region's second-most productive river system. Salmon is a billion-dollar industry in Southeast Alaska, and is also a major facet of life for the people who live there, including those who depend upon the fish for subsistence.

Such a risk is not unheard of. Early last month mining outfit Chieftain Metals was informed by the B.C. ministries of Mines and Energy and Environment it was out of compliance with its permitting for the closed Tulsequah Chief mine, which for decades has been bleeding acid into a tributary of the Taku River.