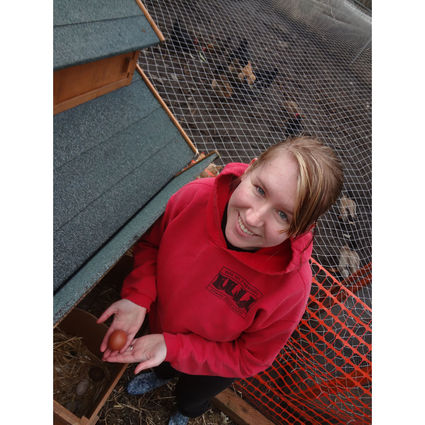 Shawna Durfey finds a couple of fresh eggs in her coop Saturday afternoon. She is one of a number of residents who raise varying numbers of chickens, ducks and geese, both for sale and personal consumption.

One of the unique pleasures of living in Alaska is being able subsist off the land. Much can be made of the opportunities to fish, hunt and gather various edibles, but some locals have decided to live off the land a little closer to home.

A number of residents have taken to raising chickens, either for themselves or to sell, or a bit of both.

Dave and Paula Rak have been raising them on their property now since 2000, and today the flock numbers at around 40 hens.

"We started with just getting cockerels," he said, primarily for meat. "I liked the chickens so we started getting what they call 'pullets,'" or female birds.

The Raks originally would rotate a chicken box over tops of garden boxes when letting them go fallow, but the number of birds soon necessitated a permanent coop. Now they enjoy a coop that's adaptable to weather conditions, and is also lit by electricity.

"They lay more when they get light," Rak noted.

Also up the highway, Kelly Ellis has been raising chickens on her family property about a year. Her brood numbers around 50 now, which keep her family well-supplied with eggs.

Not all broods are so big. Kathleen Harding keeps six chickens at the moment, and is starting on her third year now raising the birds. And Martin Hutten generally keeps five chickens for his family.

"The number fluctuates," he said. "It's kind of the perfect minimal configuration."

Unless a person has family connections or their own chicken, they will likely have to visit Katherine Ivy at Ivy Patch Produce to get their fresh egg fix.

The business gets its supply from residential chicken famers, people like Rak, Harding, the Riels and Ellis. Demand often outstrips availability, and Ivy has had to maintain a weekly list to help cycle out customers and allow people the chance to buy farm-fresh eggs.

"There's always been this pretty big demand for eggs," she said. The list and the sales predate Ivy Patch, which Ivy had started up with Dan Trail in 2011. Before that, Trail had sold local produce out of his van, a mobile marketplace called Tuesdays Organics.

His first supplier ended up being Rak, whose eggs he first encountered during community markets.

"We got to talking one day and I said 'Hey, I'd be interested in selling some of those,'" Trail recalled. What he liked about the locally produced eggs were their flavor, and the fact that one could have a better idea of what the chickens were eating.

Most, if not all, of the island's chickens are free-range, giving the birds a bit more variety in what they eat. In addition to the greens, bugs and grubs they browse at, their owners have a nice array of items they like to feed to their chickens.

"It's pretty simple," said Shawna Durfey, who keeps about a dozen chickens behind her home. Their main sustenance is a combination of layer feed and scratch corn, plus black sunflower seeds for their coat. But she also gives them greens, vegetables and assorted odd-ends to enjoy.

"Usually they're just like my garbage disposal," she joked.

On top of his layer and scratch, Rak will go to local grocers for old produce, which he arranges inside the coop for his chickens to pick at. Other chicken raisers have the same idea, and often it's down to luck and good timing.

"There's competition for it," Rak said. "Some days I don't get anything. But yesterday I got a bunch."

Other items make their way into chickens' diets. Hutten found his are pretty big fans of smoked salmon skin.

"That pretty much is their favorite," he said.

Ellis explained the wider variety of diet her chickens get ends up producing a better egg, ones with a brighter orange to the yolk and which hold together nicely.

"Of course that translates into more nutrients in the egg," she said.

Local chicken-rearers have some problems to contend with on the island, such as predators. Ellis' brood is down to around 50 birds now after what she suspects is either a mink or a weasel started targeting her hens. Before that she had to contend with a hawk – putting up a netting overhead helped, but obviously couldn't protect her birds from threats on the ground. 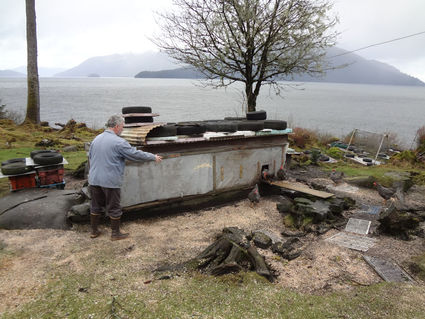 Dave Rak spreads some scratch for his chickens on Saturday. The blend he tosses has a combination of corn, wheat and commercial feed to supplement his birds' diet.

Rak lost eight hens last spring to ravens, and initially had to up gillnetting overhead to deter them. Eventually the attacks stopped, and he has cautiously started to let his chickens roam about again.

Harding, who lives off the highway, has to be mindful of passing traffic.

Weather is also a consideration, and chicken farmers have different ways of contending with winter cold and persistent rain. For example, Hutten has rigged up a mechanism to keep his birds' water from freezing during the winter, and Rak has removable insulation to keep the coop warm.

The often damp conditions means the ground is often muddy, and Rak keeps a covered area stocked with dry wood ash, which the chickens enjoy using as a dust bath.

Ellis finds her chickens don't cope well with rain, but her ducks enjoy it just fine. She has 25 now, and coupled with predation problems Ellis thinks she might transition more into raising the larger bird.

"I like the ducks better," she explained. "They're happier and they're quieter."