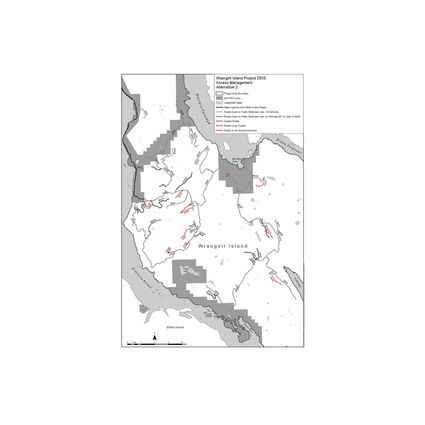 This diagram from the United States Forest Service outlines access management for Alternative 2 of its proposed Wrangell timber sale. More than 30 miles of roadway would be added for the sale, to be decommissioned afterward.

On June 2 the project draft environmental impact statement (DEIS) was completed and put out by the Wrangell Ranger District, which manages the area. Of the four action alternatives and a no-action alternative being put forward, USFS expressed support for Alternative 2, proposing the harvest of 65 million board feet (MMBF) on 5,309 acres of land with the construction of approximately 32 miles of road.

Alternative 1 is a non-action proposal, while the other three are differing iterations of the sale. In all five alternatives, the timber being considered in the sale is entirely old-growth; young-growth harvest was excluded as no commercially viable young-growth timber is said to be available. Under Alternative 2, approximately 3,528 acres would be partially harvested, with the remaining 1,781 acres clearcut. Harvesting would be achieved using conventional cable, shovel and helicopter logging systems.

Harvesting would take place over a 10-year period, with new and temporary road construction that would be decommissioned after completion of the project. Alternative 2 was designed to harvest timber in the roaded land base, ostensibly providing timber volume opportunities for both large and small sales outside of the 2001 Inventoried Roadless Areas (IRAs).

The alternatives take into consideration issues raised by members of the public, as well as input from cooperating agencies and departmental specialists. The preferred Alternative 2 provides the greatest amount of timber volume for individual sales, while attempting to provide the greatest amount of motorized public access following harvest. Approximately 101 miles of USFS road would be available for public motorized access after the sale, of which 14 miles would be restricted to motorized trail use.

Other impacts assessed by the proposal include job creation: 252 annualized local jobs would be supported under current Region 10 policy, as well as 303 domestic processing.

Environmentally, Alternative 2 would have relatively the highest affect on surrounding scenery compared to other proposals, and would affect the winter habitat of various mammal and bird species by varying degrees. The trees being harvested would primarily be hemlock, with less than half being Sitka spruce and cedar.

A public open house is planned for the latter half of June, with a date and time to be announced. The DEIS and associated road and unit cards are available for review online at http://www.fs.usda.gov/project/?project=34831. Paper copies are also available at the Wrangell Ranger District.

The 45-day public comment period has already begun, and will last through July 18. Written comments may be submitted via e-mail to comments-alaska-tongass-wrangell@fs.fed.us, with 'Wrangell Island Project' in the subject line. These can also be faxed to 874-7595, or mailed to Ranger Robert Dalrymple, Wrangell Ranger District, PO Box 51, Wrangell, AK 99929.