Net pen grounded for repairs near Sandy Beach in Petersburg 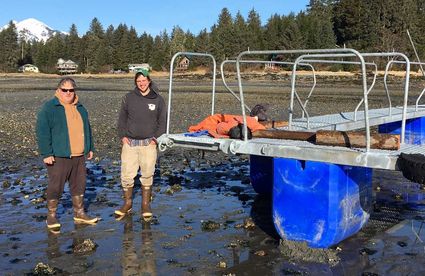 PETERSBURG - Early Tuesday morning the Southern Southeast Regional Aquaculture Association's floating net pens were being moved into position near the mouth of City Creek, when a structural failure took place. Employees had to move the pen into shallow water along the Sandy Beach tide flats to make repairs.

Crystal Lake Assistant Hatchery Manager Kevin Chase explained that a metal beam came loose and had to be reattached, forcing them to realign and re-bolt the listing structure before continuing.

By 8:30 a.m. the tide was turning and Chase predicted the pen frame would be floating within a...