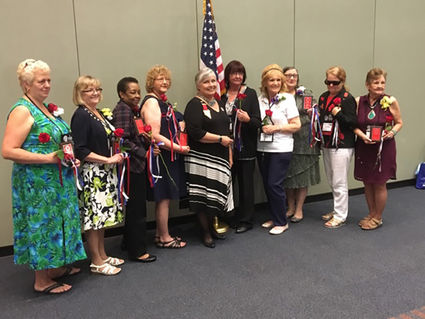 At the far left, president for Wrangell's American Legion Auxiliary Marilyn Mork stands with a dozen other recipients of their states' "Woman of the Year" awards, during the ALA National Convention in Reno on August 22.

Three members from Merlin Elmer Palmer, Auxiliary Unit 6, joined 1,500 other delegates, as well as alternates and guests from around the United States in Reno, Nevada. Accompanied by Barbara Hommel and Zona Gregg, respectively the chapter's vice president and treasurer, president Marilyn Mork was recognized as Alaska's Woman of the Year.

"I was kind of surprised that I was the woman of the year," Mork said of the award. She has been a member of the AMA for about eight ye...