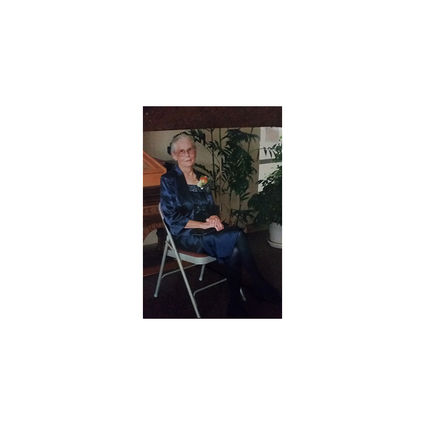 Annie Armstrong got her wish, to die at home, and was united with the Lord, July 23rd 2017. She began her life April 11th, 1921 having been born in her parents' house near Omeeme Ontario Canada. She joined a large extended family and was the 2nd of 4 children. Parents were Francis {FAnny} Fee and Charles William Fee. Her nickname was wee Annie.

She had no intention of moving as she had established a business raising Turkeys for the local Oshawa market.

Everything changed when she met her brother in law at a family dinner.

Her new life began as a Fish Buyers wife after arriving in Wrangell in March of 1951 aboard the steamship Baranof out of Seattle with her husband Harvey {Curly} Armstrong.

Rumor had it she was a "mail order Bride".

She became the book keeper of the business and vividly remembers walking over huge Halibut {her previous experience with fish was canned salmon} to get to the office.

If you ever heard her tell the story of her arrival and other life stories, you knew she had an amazing memory and was a gifted storyteller.

Visitors were always welcomed with a cup of her favorite tea and a snack. She loved sitting around her table with treasured friends, family and visitors of all ages discussing current events well into her 90's.

The Presbyterian Church was an important part of her life. She not only served as a Deacon, taught Sunday school for years but willingly volunteered at the Annual Bazaar at the dessert table into her 90's as well.

She coordinated the 1st 4-H club in Wrangell and helped her husband manage Armstrong Rents.

Her love of gardening became a business, Anns Gardens. She loved sharing her gift of gardening in SE Alaska with others. Of the hanging baskets she sold, her favorites were begonias.

Raised during the Depression she was the ultimate recycler. Used broom handles became walking sticks. Egg shells, tea bags and banana peels were put around her favorite flowers, Roses. Used envelopes were saved to make notes on. Leftovers and yard clippings went to the mulch pile.

Her strong Faith was harshly tested in the early 80s when stage 3 Ovarian cancer was diagnosed. Her prognosis was grim but God had other plans for her, Reaching out to others with cancer was very important to her.

When her husband became ill, love and perseverance sustained her for years as she cared for him at home. Although moving him to Long Term Care was extremely hard, she went every day for dinner and soon found a niche helping new and old friends.

Annie was preceded in death by her husband Robert Harvey Armstrong and now rests beside him in Sunset Gardens in Wrangell.

Memorials may be made to the Presbyterian Church, 220 Church Street, Wrangell, AK 99929.

A Funeral was held August 2nd at the Wrangell Presbyterian Church.