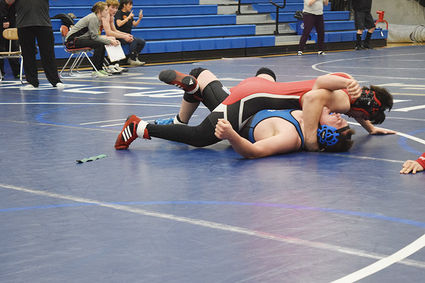 On top, Wrangell's Dillon Rooney catches Vikings senior Brandon Ware in a pin on November 10, during a round-robin match in Petersburg.

Wrangell's Wolves wrestlers had a good tournament in Petersburg over the weekend, edging out the home team for pins in a two-day tournament.

"It was good," said coach Jeff Rooney. "We ran a couple of different styles," he explained, with a scramble format followed by a round robin on November 10. The following day, round-robin match-ups were followed by a bracketed format.

In a mixed face-off on Friday, JD Barratt wrestled his way to the top of his 113 weight bracket. In a round-robin he won all three matches, ending two in pins after about a minute and a half and the third by technical f...