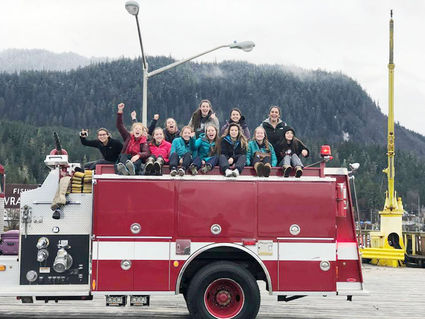 Taking the scenic route through town on the back of a fire truck, the girls from Wrangell High School's volleyball team get a triumphal return from Region V in Petersburg over the weekend. Taking second place overall, the Lady Wolves secured their first trip to State in over a decade.

After a rollicking three days in Petersburg for Region V, the Lady Wolves volleyball team will be headed to State next weekend.

Twelve Wrangell students headed to the tournament, seeded third among their division's teams after a hard-fought season.

"Everybody got to step onto the court over the weekend," said Jessica Whitaker, Wrangell's head coach.

Her girls began their tournament against Haines on November 16, starting off with a strong 25-9 win. The second match came out more closely at 25-18, with Haines reversing those scores in a third-match win of its own. The series ended with a Wra...