Chinook outlook not so good for 2018 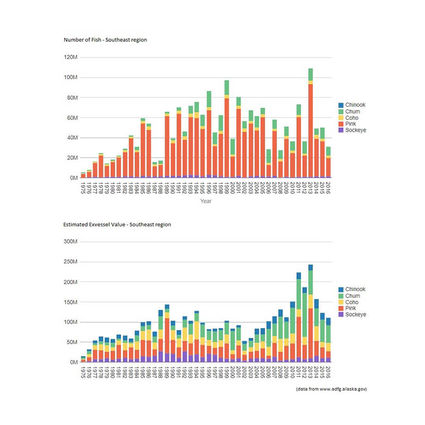 A breakdown of five salmon species shows how much of an impact each makes to Southeast Alaska's maritime community. Though pinks have traditionally made up the greatest share of the catch, in terms of value chum and coho have made up a significant part of exvessel value due to declining

A preseason forecast for next year's king salmon return to the Stikine River has come up worryingly short, boding ill for local fisheries.

Released last week by Alaska Department of Fish and Game, the preseason terminal run size forecast for the Stikine River was at only 6,900 fish, less than half the lower threshold of the stock's escapement goal range. The Stikine EGR is between 14,000 and 28,000 Chinook salmon, and such a low forecast does not allow for an allowable catch under treaty management.

On the Taku River the forecast is more grim, with a projection of 4,700 king salmon in a ran...