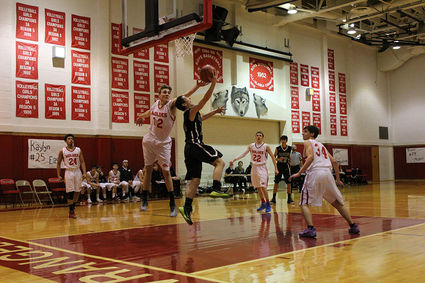 Riley Blatchley prevents Haines player Mark Davis from scoring during a home game win last month. The Wolves and Lady Wolves both head up to the northern panhandle for a rematch this weekend.

The Wrangell Wolves chalked up a pair of losses last weekend hosting the Metlakatla Chiefs, though it easily could have been a split between the two teams.

Friday's evening game was a blowout for the Chiefs, which controlled the court for much of the game. Though the final score ended up in a 52-42 win for them, Wrangell coach Cody Angerman acknowledged some last-minute catching up had helped close a larger gap between the two teams.

By now in the second half of the season, the teams' meeting is their second in the rotation. Previously Wrangell had trouble keeping up with Metlakatla's offen...