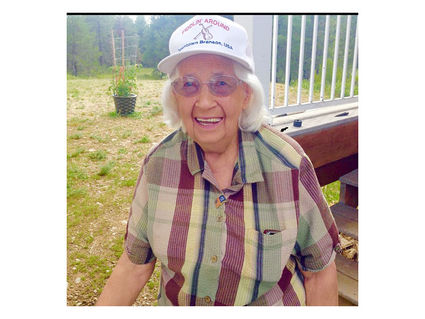 She was born on Sept. 9, 1929 to Earl and Ethel Hannaford in San Francisco, California, the month before the Great Depression. Her father was a postal worker, and her mother a nurse.

She grew up with a love of music, especially the fiddle tunes played at the old time dances that her parents and grandparents went to every weekend. After graduating from Palo Alto High, she married Frank Romerez and had her first child Francie, before the marriage ended. Struggling with some feelings that something wasn't quite right in her mind, she began a five year battle with alcoholism, drinking from morning to night and even at work.

During the four years that she dated Allen Taylor, they were invited to church by his mother one evening. There she heard the salvation message for the first time and committed her life to Christ. From that moment on, God miraculously delivered her from alcohol, cigarettes and the feeling that she was mentally unstable. When she married again, she became the mother of Taylor's two children, Allen and Audrey and soon added David and Yvonne to the blended family.

In 1968 they sold everything and left for Alaska after vacationing there.

Many years while working for the Wrangell School District, the couple would fish, hunt and dig clams during the day then would head to work. They opened a music store in their daylight basement. After retirement they operated a recording studio part time, when they weren't traveling or fishing.

She was been a member of the Alaska Pioneers, Wrangell Symphony, Assembly of God, past President of the Hospital Auxiliary and for 35 years taught Sunday School to primary age children, as well as helping with Vacation Bible School and Christmas Programs.

She was preceded in death by her husband Al; daughter Francie; and brother Bud.

A service will be held at Harborlight Assembly of God on March 17 at 11am with a potluck to follow downstairs.

In lieu of flowers, donations can be made to the renovation project at Harborlight, P.O. Box 1936, Wrangell, AK 99929.