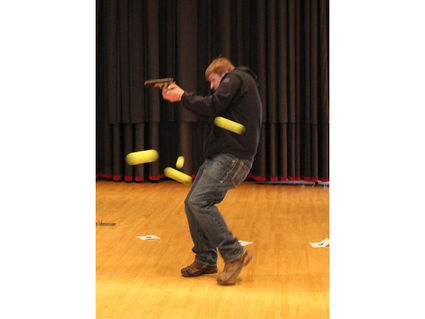 For distraction's sake, Lorne Cook gets bombarded with balls while simulating a mass shooting during last Thursday's ALICE training at the Nolan Center. Arranged on behalf of the city, the two-hour program sought to introduce participants to more evasive strategies during a violent intrusion.

James Nelson, now working as an officer with Wrangell's Forest Service office, led the courses at the Nolan Center March 15 and 16. He used to serve on the Wrangell Police Department, a position he had first taken in 2008. With scheduling in the works since last fall, his presentations last week were being done on behalf of the city, primarily for the benefit of its departmental staff.

The crisis response framework Nelson was presenting is not new to Wrangell,...