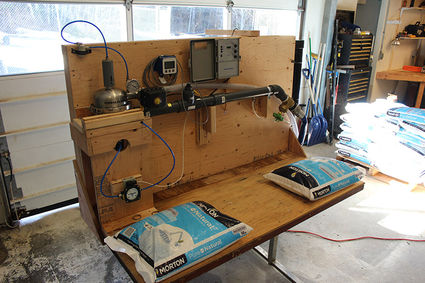 A new kind of filter is in the process of being tested out at Wrangell's water treatment plant. Samples are currently being taken of the device's output, which runs through a cylindrical screen mesh rated to five microns. What sets it apart from the plant's current roughing filters is its ability to self-flush, clearing the screen of blockage. A gauge is set to automatically trigger the flushing system when inflow and outflow pressure reaches a differential of 7.5 PSI.

The city has lowered its alert stage level for water conservation, dropping from its red-level Stage III stance to an intermediate Stage II.

Citing dwindling supplies at its reservoirs, on March 13 City Hall had urged residents to dial back their water usage with the Stage III announcement, jumping from a lesser Stage I. The designations were composed by the Borough Assembly last year in an attempt to organize response measures in the event of a shortage. This followed a water crisis in the summer of 2016 triggered by a production shortfall.

An icy, lengthy and dry winter this year has limi...