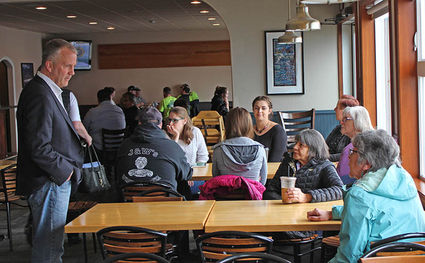 Sen. Dan Sullivan converses with Lovey Brock and Tis Peterman about regional issues during a public gathering at the Stik last Friday. It was one of several sessions the senator made during his half-day stay in Wrangell, his first visit since assuming office in 2015.

Sen. Dan Sullivan stopped into Wrangell for a lightning tour Friday, arriving on the morning jet and taking off that afternoon for Ketchikan.

His visit to Wrangell was the first since being sworn in,

Republican ticket. On a brief break in the session, he had earlier in the week attended training for the Marine Corps Reserves before heading back to Southeast.

"I really just wanted to get back to the community and see all you guys, see what the issues are," he told members of the City and Borough Assembly fo...