Walker makes stop into Petersburg for May 17 festival 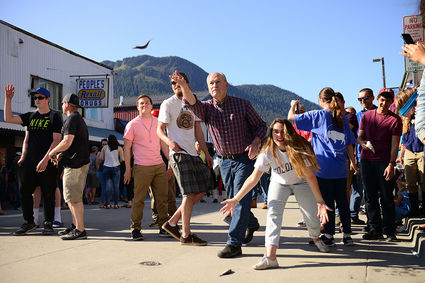 Gov. Bill Walker tries his hand at the herring toss during Petersburg's Little Norway Festival last Friday. Marking "Syttende Mai," or May 17, the holiday celebrates the adoption of Norway's first constitution in 1814.

PETERSBURG ­– Gov. Bill Walker stopped in Petersburg for a brief visit Friday, making the rounds for meetings and taking some time to participate in its Little Norway festivities.

"It's perfect. I can't complain about a day like today," Walker commented, noting the afternoon's cloudless sunshine. He had attended Petersburg's distinctive festival before, but this year's trip was his first since being elected as governor four years ago. "I came down obviously to meet with various folks, but I was also in the parade. It was a great parade, one of the best in the state."

After the Alaska Le...