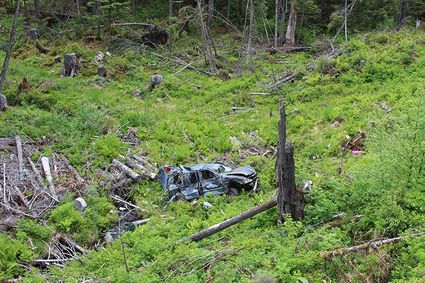 Before being removed Tuesday afternoon, the wreckage of a Ford Expedition rests below the bridge over Pats Creek. It had been involved in a fatal accident late Sunday night, resulting in two fatalities.

Rainie Doak was traveling with her three children northbound on Zimovia Highway late Sunday or early Monday morning. Doak is believed to have been at the wheel when the Ford Expedition lost control approaching the Pats Creek Bridge, about 12 miles south of Wrangell.

The road approaches the bridge at an angle and conditions that evening had been wet. Police also suspect the sports utility vehicle had been traveling at highspeed, its tires leaving...