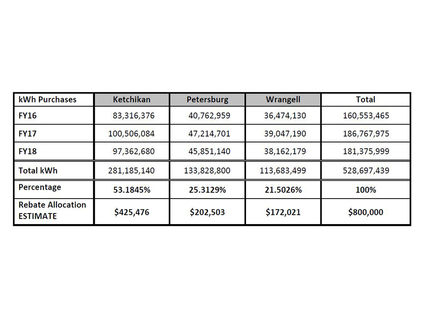 A chart breaks down the formula for meting out this year's power rebate to Southeast Alaska Power Agency customers. Its three constituent communities have traditionally received an annual return, with portions determined by historical usage.

Meeting in Wrangell this week, board members with Southeast Alaska Power Agency approved a municipal rebate and power rates for the coming year.

Headquartered in Ketchikan, the organization generates and distributes power for the Gateway Borough, Wrangell and Petersburg. Board membership is split between the three member communities, meeting at regular intervals throughout the year to set rates and direct projects.

Pending a successfully completed audit, member communities would split between them a rebate of $800,000, to be deducted from the agency's earnings. Wrangell would receive just o...