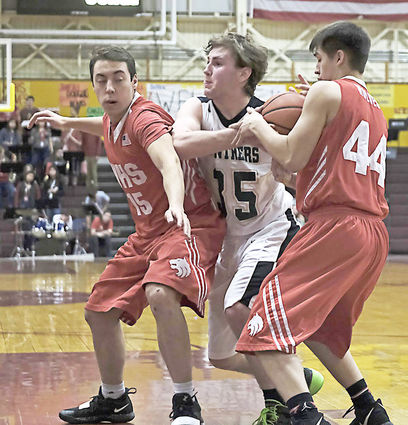 Courtesy of the Daily Sitka Sentinel

Craig Panthers player Wayland Patten (No. 35) is tied up by Wrangell Wolves players Jean-Luc Lewis (No. 15) and Jacob Hammer (No. 44) during the regional championships held in Sitka last week.

The Wrangell Wolves have come to the end of their season after a difficult series of games in Sitka, at the regional tournament. Teams from all over Southeast Alaska came to compete. Wrangell was seeded third going into Regionals, behind Petersburg in second and Metlakatla in first. After three games, however, Wrangell was knocked out of the running for the state championship.

"Whenever you lose it's never going the way you want," said Coach Cody Angerman. "It doesn't make me any less proud of my guys. They fought hard all year to be there."

The Wolves went up against the Petersburg Vikings...