Rays give Bears first loss of the season 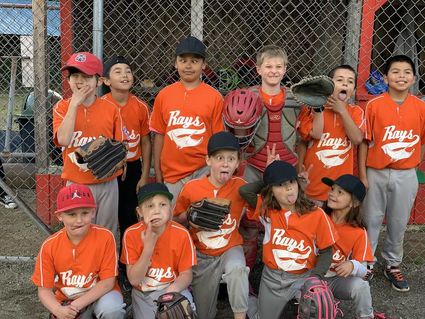 The Rays before their game against the Bears on June 4. The Rays would go on to give the Bears their first loss of the season. Pictured here (left to right, from the top row) is Delaney Decker, Bradley Eklund, Kiara Lyons, Lucas Stearns, Zander Bartlett, Kai Wigg, Connor Blake, Lynnea Harrison, Addie Bania, Kiara Brevick, and Amura Brevick.

Breaking a season-long winning streak, the minor league Bears faced their first loss of the year at the hands of the Rays. It was not a narrow defeat, either, as the Rays made over twice as many points as the Bears, with a score of 16-7 on June 4. The Rays have had a somewhat average season, winning as many games as losing, but unseating the Bears was a good demonstration of how far the team has come, according to coach Tawney Crowley.

"It was 100 percent their attitude," she said. "They were working together. We had a big pep talk at practice the day before, talking about the expectations...