Fun on the Fourth 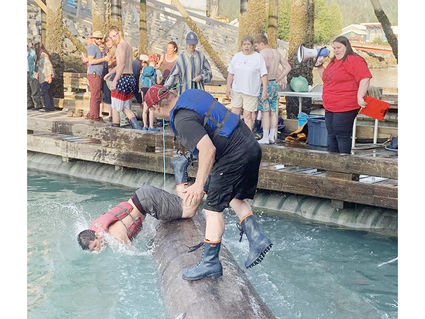 Lee Wiederspohn sending Jared Gross into the water at the annual log rolling competition during the Fourth of July. Wiederspohn took first place in the competition this year.

The Fourth of July was a hot and sunny day in Wrangell, but that did not stop many people from getting out and having a good time. Like all previous years, this year's fourth was the culmination of a whole week of events to celebrate Independence Day. There were numerous events, games, food booths, and other things to do to keep everyone busy last Thursday.

While this year stood out because of a lack of fireworks due to ongoing drought conditions across Southeast Alaska, it still brought out lots of people.

Alicia Holder, with the chamber of commerce, said that an event as big as the Four...