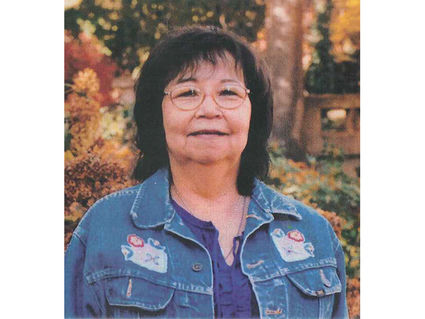 Johanna Marie (Bradley) Joseph, 74, passed away in Wrangell, Alaska on October 16, 2019 after a short battle with cancer.

She was born in Wrangell on February 20, 1945 to Henry Bradley and Theodosia ( "Fanny" ) Nauska. She was Aleut and Tlingit (Raven, and Frog from the Sun House.)

Johanna lived and loved her whole life in Wrangell. She graduated from Wrangell High School, during which time she worked for the parents of her girlfriend, Linda Goodrich, in their restaurant.

She married Morgan Joseph, on June 25, 1966. They were married for 43 years, until Morgan's passing in 2009. They raised their two children, LeAnn and David here, where they went fishing and camping together. They also enjoyed going on family vacations.

After she was married, she cleaned for the Brig Bar for Lawrence Bahovec; and then cleaned rooms at the Thunderbird Hotel for Winston and Frances Davies. In the 1980s she started working at the Wrangell Senior Center, first as a prep cook and dishwasher, but rose to head cook before retiring after over 30 years of service.

Johanna loved her family and especially her children and grandchildren. She would take every opportunity possible to be with them, cook for them, or go camping or otherwise go out with them.

She also had a passion to be out on her boat and loved to fish the Wrangell Salmon Derby. On Mother's Day one year she landed a 46.3 lb salmon.

After her retirement, she fished as often as possible, went out with friends and family, and caught the bug for traveling. On one trip, Johanna went to Spokane, WA and stayed with Rolland, and they went to a Shania Twain concert. That same year she went to Anchorage, and she and Dinah Martin went to see Toby Keith. the most memorable trip for Johanna was traveling to Unalaska with her sister, Anna, and daughter, LeAnn. That trip, in June of 2017, was made possible by the Aleut Corporation to commemorate the 75th Anniversary of the Battle of Attu.

Johanna was very conscientious about celebrations and sending cards to everyone. If you were in her circle of family and friends , you could always count on getting a birthday or holiday card.