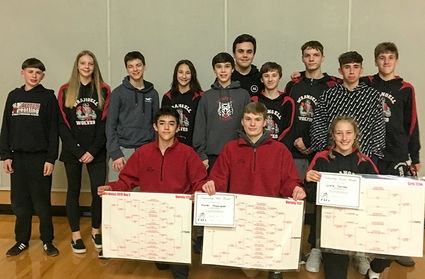 The Wrangell Wolves wrestling team at the Bill Weiss tournament in Ketchikan. Wrestlers Liana Carney and Hunter Wiederspohn were recognized as outstanding wrestlers during the competition.

After the two-day Bill Weiss tournament in Ketchikan last week, The Wrangell Wolves wrestling team claimed fourth place. They garnered a total of 100 points during the tournament, ahead of eight other teams. Ketchikan High School took first place with 201 points, followed by Glennallen and Thunder Mountain. Individually, several wrestlers stood out with their performance during the competition.