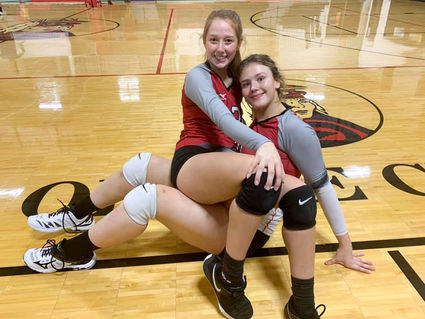 Lady Wolves Kaylyn Easterly and Ashlee Olson pose for a photo after winning a set of three games against Petersburg.

Wrangell's volleyball team travelled to Klawock last week, where they faced off against Klawock's home team, Craig, Petersburg, Haines, and Metlakatla. The team had a tough start, according to Coach Alyssa Allen, but they were able to hit their stride and finish the tournament with several wins.

On Thursday, Nov. 7, Wrangell first went up in a best three-out-of-five set against Klawock. They lost the first two games at 24-14 and 25-8, respectively. The next two games were nail-biters, with Wrangell winning with scores of 25-23 and 28-26.

The final win, however, went to Klawock with a score...