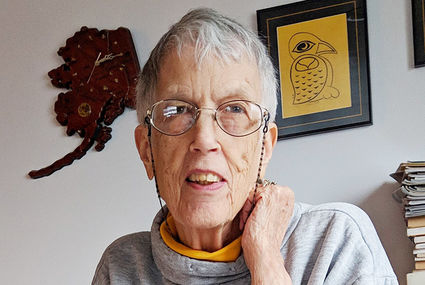 Janet Lee Teague passed away in Wrangell, Alaska on March 15, 2020.

She was born on January 31, 1937 in Portland, Oregon to Russell and Dorothy Weaver. She and her parents were some of the early pioneers of Alaska, moving to Valdez in the early 1950s. It was in Valdez that Janet met the love of her life, Frank Teague. On July 1, 1955, Janet and Frank began a 64 year journey together which took them to Anchorage, around the state, around the world and ended as it had always been; side by side.

Be it working together on the fishing boat, driving to the lower 48 to see her kids or travelling to Japan to see her grandchildren, she was happiest when she was with family. Two of Janet's fondest memories, of which she often spoke, were of her 50th and 60th wedding anniversaries when her children arranged family reunions to celebrate the life she and Frank had built together.

Janet was a multi-faceted woman whose skills and passions were many. She was an accomplished singer. Not only a fixture in her local church choirs, Janet was a long-time member of the Anchorage Sweet Adelines Sourdough chorus and barbershop quartet. Her chorus represented Alaska on multiple occasions at the national Sweet Adelines competition and once at the international level.

Janet was an artist as well, creating works through sewing. From baby blankets to hats, Janet created beautiful pieces which are treasured belongings of her family. Janet's passion was travel. Whether it was a family, summer road trip in California or jetting off to Ireland, Fiji or Japan, Janet loved to see the world. In retirement, Janet indulged her love of travel as she and Frank fished commercially, travelling throughout southeast Alaska, which is what brought them to Wrangell in 1992. Janet and Frank loved hosting family on the boat, but most importantly it was time spent with Frank, her partner in life.

She is survived by her husband Frank; her children, Dorothy, Rick, Joan and Pat; seven grandchildren; and three great grandchildren.

A funeral will be held in Wrangell for Janet with the date and time to be announced shortly. Janet's family will gather in Wrangell in August for a celebration of Janet's life.